A recent case in the Fair Work Commission highlights a lawful termination of an employee following the employee’s misuse of social media.

There have been other cases concerning the dismissal of employees for inappropriate social media use that did not stack up to scrutiny.  What makes this one different? 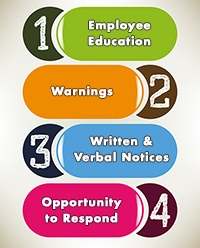 Go to the article ” The Correct Procedure for Terminating Employment”
It is because Credit Corp Group were very careful in following the correct procedure for dealing with such an issue. They made sure they provided:-

Go to article on The Correct Procedure for Terminating Employment.

In his defence, Mr Little argued…

But aren’t I entitled to my personal opinions?

Mr. Little argued that he was entitled to his personal opinions, which were posted online.

The FWC pointed out that, although an employee is “perfectly entitled to have his personal opinions, he is not entitled to disclose them to the ‘world at large’ where to do so would reflect poorly on the Company and/or damage its reputation and viability.”

But!  The posts were made outside of work hours!

The FWC confirmed that it is not when the comments were made that is important, but the effect and impact of those comments on the employer and other employees.  It said; “It is clear that in certain circumstances an employee’s employment may be validly terminated because of out of hours conduct.  But such circumstances are limited:-

In essence, the conduct complained of must be of such gravity or importance as to indicate a rejection or repudiation of the employment contract by the employee.  Absent such considerations, an employer has no right to control or regulate an employee out of hours conduct.”(1)

In this case, the FWC found that Mr. Little’s conduct:

The FWC also considered that Mr. Little, while prepared to admit that he breached the Code of Conduct and company policies, was not in any way remorseful for his actions.  Rather, he asserted that he was indeed entitled to do what he did, and gave unconvincing excuses for his behaviour.  This left his employer with doubt that the inappropriate behaviour would stop.

What can employers take from this decision?

Your business should have clear policies in place that outline your position regarding social media use.  Further, you should adequately communicate these policies to your employees and provide ongoing awareness and education on the matter.

Do not ignore breaches of your policies by employees.  Consider issuing a formal warning and/or take the opportunity to offer further training and support if necessary.

For serious breaches resulting in dismissal

You must notify the employee of your reasons for the dismissal, and give the employee an opportunity to respond to same, prior to terminating their employment to afford them full procedural fairness.