We’ve all heard those love songs lyrics telling us, “I want somebody who will spend some time, baby don’t rush, we’ve got the time”. Well, who would have thought they were talking about a prenup agreement!

Give yourselves plenty of time before the wedding to get it done and don’t rush. 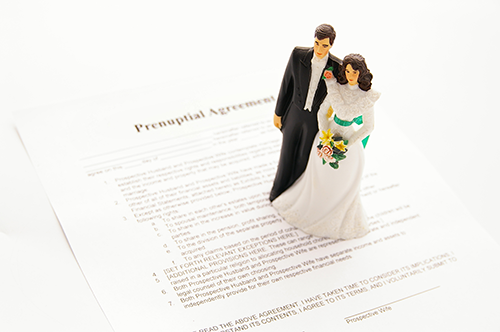 Leaving the prenup till the last minute is a really bad idea because it can raise questions about the validity of the agreement and whether it was made under duress.

You and your future spouse need time to consider the implications of entering such an important agreement, otherwise, you may find it fails to protect you right at the time you need it most.

Couples entering agreements of this type are often in the situation where either one or both parties have something they want to protect or quarantine from future claim. This something may be:

When it comes to assets built together after the wedding date, the couple usually decides to divide those equally.

The party with more assets to lose is often the driving force behind getting the agreement signed and in place. They generally have an advantage because they’re in a stronger position of bargaining power.

As you can imagine the party with less on the line is often at a disadvantage. They may also have less motivation to be bound by a contract that essentially limits their access to the family court, and likely, a bigger slice of the financial pie.

Under these circumstances, the less advantaged partner may be put in a real quandary and even though it may not be spoken, they may feel real pressure to sign the agreement or the wedding is off.  Now if the wedding is some time in the future this may not be such a big problem, but what if your wedding plans are well advanced?

Some couples can be so enthusiastic about getting married that they get totally caught up in planning their big day and they completely forget about the far less fun task of getting the prenup done.

The invitations have been sent out. 250 people have been invited to witness your big day, some travelling from overseas or interstate. The venue has been booked, deposits paid and possibly 10’s of thousands of dollars already spent on the big day.

A week or two before the big day the stronger party presents the weaker party with an agreement that must be signed before the wedding.

Is the weaker party really in a position to say “No” or even negotiate? What if they are totally dependant upon the stronger party to stay in the country or for financial support?

Leaving your prenup to the last-minute leaves your agreement vulnerable to a successful challenge. In Thorn vs Kennedy, the husband and wife left the prenup to a matter of days before the wedding and when the marriage failed, the courts ruled their agreement was invalid.

The full bench of the high court ruled the agreement was not binding because the wife “signed the agreement under duress borne of inequality of bargaining power where there was no outcome to her that was fair and reasonable.”

So under the circumstances outlined above, does the weaker party still have free will? Of course, they could still say “No I won’t sign the agreement”, but there may be some very serious ramifications for not signing the document.

Taking advantage of the weaker party in such circumstances may be described as unconscionable. With this in mind, it’s crucial that the parties give serious thought to the position of the other party and whether inequality of bargaining power exists.

PRO TIP: Give yourselves plenty of time to discuss the terms of your agreement. Try to finalise your prenup before making other wedding plans. Whilst it may not be the most fun part of wedding preparations, put it at the top of your to-do list.

Allowing time to think about whether you should accept or reject the terms of your prenup agreement and consider alternative terms, is indicative of a genuine negotiation.

A genuine meeting of the minds is less likely to be interpreted as coercion, duress or abuse of bargaining power and more likely to provide a sound agreement.

After all, what is the point of putting an agreement in place if you can’t rely on it when you need it most?

This does not mean an agreement will automatically be invalid if it is signed right before the wedding. It is the circumstances surrounding the agreement that will ultimately determine if duress, coercion or unconscionable conduct was a factor at the time the agreement was signed.

Overall Binding Financial Agreements still provide the protection you seek, but couples need time to negotiate the agreement and not rush the process. If you follow this simple rule your agreement should stand the test of time, and with a bit of luck, your relationship will too.

This article by Ian MacLeod

Ian liaises with the legal associates and takes care of our customers – essentially he acts as a conduit between the non-legal and legal world.

Over the last 12 years, Ian has amassed a deep knowledge of our contracts and how they relate to the relevant legislation. He understands how the contracts should be used and enjoys helping our customers find a legal solution that meets their needs and their budget.

Other Resources about prenups

Our financial agreement (prenup) kit includes a comprehensive Users Guide that explains the law as it applies to this agreement. It will show you in simple terms how to thoroughly cover important legal requirements, and how to complete your agreement in detail. In addition, it contains alternative legal clauses and provisions you can use to personalise your agreement. It also includes access to our complimentary agreement assessment process and Fixed Price Legal Advice Service

Anna sent in this Burning question – she asks “Why do some say that they are absolutely necessary and others say that they are very easy to break? Is a good lawyer and prenup non-existent? Would love to know a bit more about prenups?” It’s a great question!

What we can learn from Grant Hackett’s prenup mistakes

Earlier this year, Grant Hackett received more unwanted media attention with reports he was suing his solicitors for preparing a defective Financial Agreement. Whilst we’re not all that interested in his personal life, these events do raise some interesting and common issues regarding prenup’s and financial agreements in general.