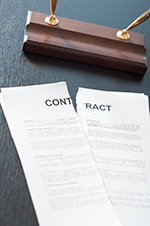 What does terminating a contract do?

Terminating a contract brings the contract or agreement between you and another party to an end.

What circumstances can lead to a right to terminate?

A contract may be terminated on the grounds of performance, provided that all the terms have obligations have been complied with perfectly (or to a sufficient standard as provided under the contract). This is a common reason for termination, as it means all of the obligations under the agreement have been fulfilled.

Parties to a contract are free to terminate a contract by agreement, even if all the terms of the contract have not been performed. For example, the parties may terminate one contract in order to enter into a new contract.

Not all breaches will result in a right to terminate and there may be additional steps required to enforce your rights before choosing to terminate. Other remedies available for breaches of contract terms include seeking specific performance, which requires the other party to perform the obligations of the contract. Alternatively you can ‘reaffirm’ the contract and continue its operation by agreeing to the breach. You can also permit the other party to rectify the breach or sever the breached term, enabling the rest of the contract to continue.

Frustration means that the terms of the contract are unable to be performed and the contract must come to an end (e.g one party has died or due to legislative changes).[3] The frustration must not have been caused by either party and or have been reasonably foreseeable.