The language of the law is like no other. Confounding mere mortals for centuries, it was born when the Crown ruled supreme, and Latin was the lingo of the day.

But despite the passage of centuries, the ‘hereinbefores’, ‘heretofores’ and ‘hereinafters’ persist – in one form or another – to this very day. But where, and why, did they come into being?

To discover that we need to take a little walk through history back to 1066. It all began with the Normans… 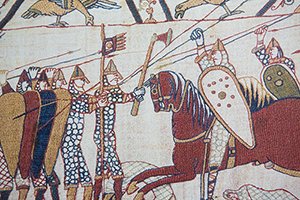 When King Harold was defeated at the Battle of Hastings – Norman French became the language of the day. This impacted the use of language throughout the English society.
King Harold has just taken an untimely arrow to the eye, losing the Battle of Hastings in the process. The Norman conquest of England is complete and Norman French is set to become the language of the day. But there’s one small problem.

The language of the courts – and of learning – is Latin.

The language of the people is English.

Although Norman French and Latin are in theory, the language of the Government and the courts, the English refuse to be swayed.

With neither side prepared to cede superiority, a mish-mash of Norman French and English is born, with many Norman words being adopted as part of the English language.

But with a language in transition and a population refusing to ‘parler le Français’, there’s one more problem.

How do you write it down?

With scribes unable to record accurate transcripts and transactions in a common tongue, two or three words – in English, Latin and French – become better than one.

Adding fuel to the fire, ‘scriveners’ – also known as scribes – are paid by the word. Keen to eke out more than a modest living, longwindedness is their wherewithal.

But change was on the way….

By the 14th century, French had become the dominant language of the courts and statutes.

However, it remained a language of the educated classes, with the ‘common people’ continuing to speak English. 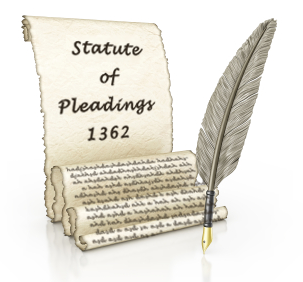 The Statute of Pleadings decreed that the language of the Law would be English but due to problems with translation and legal technicalities it didn’t stick.

Realising that uneducated English subjects going before the courts were unable to understand the proceedings, the Government realised things had to change.

So in 1362, the Statue of Pleadings was enacted.

Although it was in fact written in French, the statute decreed that the language of the law – and the courts – would henceforth be English. However, continuing the by now well established tradition of confusion, documents would continue to be recorded in Latin with study of the law in French and Latin.

But there were bigger problems.

The prescribed form of writs – requiring strict adherence under the common law – couldn’t be translated into English without losing the original meaning. This was largely because the French of the courts had become increasingly exact and technical and couldn’t easily be done away with.

Oral pleadings were similarly hamstrung. Required to follow the same form as the writs, if oral pleadings and denials didn’t correspond to the required form, the matter would fail before the court.

So things didn’t stick as the law makers had hoped, and in 1650 Cromwell’s Parliament passed another statute. Principally aimed at court proceedings, it also included a requirement that ‘statutes…shall be in the English tongue’.

Unembraced by the legal profession, it was repealed in 1660.

The purpose of these statutes was to make the law more understandable and accessible to the public. But with a legal profession largely unwilling to embrace change, progress was slow.

But although Cromwell’s statute was ultimately unsuccessful, the 16th and 17th centuries did usher in significant change, thanks to the rapid expansion of English.

However, as the transition from French to English gathered pace, there was some concern meaning would be lost. So drafters began including synonyms or near synonyms to ensure everyone’s continuing understanding.

It’s here we see the birth of terms like ‘breaking and entering’, ‘free and clear’, ‘goods and chattels’ and ‘will and testament’ – terms we continue to use to this day.

Still heavily influenced by Latin, this period also saw the birth of legal terms like affidavit, alimony and subpoena. But Greek, Spanish, and Italian also made their presence felt, with the birth of words like anonymous and autonomy.

Historians argue this was an attempt to elevate the English language and place it on a level with the classical tongues. As we still use these terms today, perhaps it worked?

The end of French domination

By the 18th century, French and Latin had become old hat and Parliament made one last tilt at converting the language of the law into English. Passing legislation in 1731, they decreed that all court proceedings and statutes shall be:

“…in the English tongue and language only, and not in Latin or French…and
(court proceedings) shall be written in such a common and legible hand and
Character, as the acts of parliament are usually engrossed in…”

As with similar moves made in the past, it was again a case of two steps forward and one step back.

After realising the law had repealed too much of the bar’s accumulated learning, Parliament passed an amendment reinstating much of the technical language and commonly used legal abbreviations.

This of course meant that the law remained reserved for those with training and knowledge in the ‘genuine language of the law’ – that being French and Latin.

And in many ways, it’s a practice that continues today.

Although lawyers no longer require a working knowledge of French or Latin to enter the profession, and the use of Plain English is becoming more and more common, an understanding of the basics is non-negotiable.

After all, where would we be without words like covenant, easement, guarantee, estoppel, heir and lien? All born from French and Latin, they’re so ingrained in our legal language that finding a replacement in our modern tongue would be akin to blasphemy.

But for a profession steeped in tradition, perhaps that’s the way it should be.