By signing, or in other words, executing a contract, you are indicating your agreement to the terms and conditions contained within the document and demonstrating your intention to be legally bound.

Make sure you understand and agree to all the terms

It might sound obvious but… before signing the contract, it is important that you first read, understand and agree to all of the terms and conditions contained in the document. 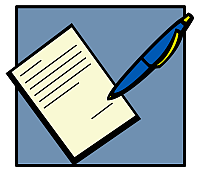 Signing or executing a contract indicates your agreement to the terms and conditions within the contract and demonstrates your intention to be legally bound.

If you find that you don’t agree with some of the provisions of the agreement or the extent of the obligations imposed on you, try negotiating those clauses, and request they be changed (or amended).

If you are having trouble understanding the agreement and the ramifications of signing it, ask a lawyer, accountant or other suitable person to assist you.

Initial each page of the agreement

Although not a legal requirement, it is common practice for the parties to initial each page of the agreement.  By doing so, this indicates each party’s agreement to the provisions on each page and makes it harder (but not impossible) for the contract to be tampered with by replacing the pages.

In some circumstances, you will be specifically asked to initial each page (or certain pages), such as bank mortgage documents and documents intended to be registered with the Lands Department such as commercial or retail leases.

A formal signing page will usually appear at the end of the document.

You may also be asked to complete your full name, address and other details.  It is important that you insert the specific names, dates, titles, etc. in clear writing.  Where block letters are required make sure it is legible and that you have not placed signatures in those sections.

Execution by a company

The most accepted method for a company to sign an agreement is by the methods set out in the Corporations Act.

Section 127 of the Corporations Act gives directions as to how a company may validly sign a contract, and execution in this manner can be safely relied on by others as being valid.

A company may execute a document without the use of it’s common seal if the document is signed by either: 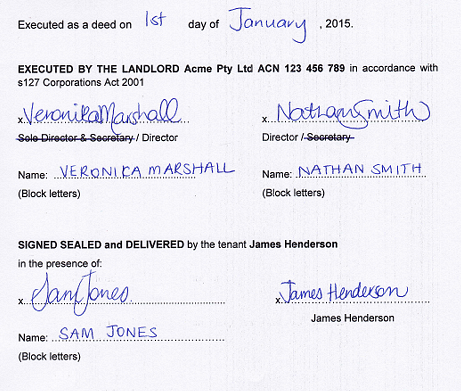 Sample of how a signture panel should be completed by the directors of a company.

Alternatively, a company may execute a document by fixing it’s common seal (if it has one) to the document and the fixing of the seal is witnessed by:

If you are signing as a director or secretary, you should write your full name under your signature, and state your position eg. director, secretary, or sole company director and sole company secretary.

If you are accepting an agreement executed by a corporation, it may be prudent to do a company search to confirm that the signatories who have signed for the company as director or secretary, do in fact hold those offices.

Signing your Agreement in separate locations

If it is not convenient or possible for you to sign your Agreement at the same time, you can sign it separately.

You should ensure that all parties receive originals or copies of the fully signed contract.

Signing your Agreement in counterparts

Alternatively, you may sign the Agreement in counterparts.  This is where two or more identical copies of the agreement are signed.

Each of the signed agreements are taken to be an original and are valid and binding on the signatory.  The counterparts together constitute the same agreement.

It is important that you retain a copy of your own signed agreement and be provided with the original of the identical agreement signed by each of the other parties.

It is imperative that all of the counterparts be identical.

Further, you should have a “counterparts clause” in your document that confirms that the agreement may be executed in counterparts and in which case, each counterpart will be an original document binding on the parties, and taken together, shall constitute the full agreement.

It is important to secure a high quality witness for your agreement.

Some documents have stipulations on who may or may not be a witness. For example, a beneficiary appointed under a Will cannot be a witness.  Statutory declarations require certain specified classes of persons witness the declaration. But for other general agreements and contracts, a high quality witness would be:

They have an understanding of the legal ramifications of signing an agreement and they are independent of the situation.  Identification may be requested so that your witness can verify your identity. Your witness does not need to have read or understood the document itself, only verify that the person signing it is who they say they are.

Witnesses are not required where a corporation is signing in accordance with the Corporations Act (see above).

Insert the date which you signed the agreement.

If the agreement becomes operative from (starts from) a different date, i.e. a date which is not the signing date, this should be stated within the terms of the agreement.  For example, “This agreement is effective from 1 July 2015” (whereas the agreement may be signed and dated 1 June, 2015).

Originals and copies of your agreement

After the agreement has been signed by both yourself and the other party, each party should have an original or full copies of the original fully signed agreement.  You can take as many additional copies of the original document as you wish.  Store these in a safe place.  You may wish to provide a copy to your lawyer or other trusted person for safekeeping also.