Welcome to RP Emery's Legal Contract Template Kits › What is the difference between a Licence and a Lease?

Leases and Licences are types of agreements that can be used to allow a person to occupy land or a building owned by another in return for rent or a licence fee.

If you are thinking of implementing either a Lease or a License, you should be aware of the differences of each of these documents.

A licence is generally a more informal agreement.  Often the licensee does not have exclusive possession of the premises – others are able to access the premises, most likely the landlord or other licensees sharing the space. 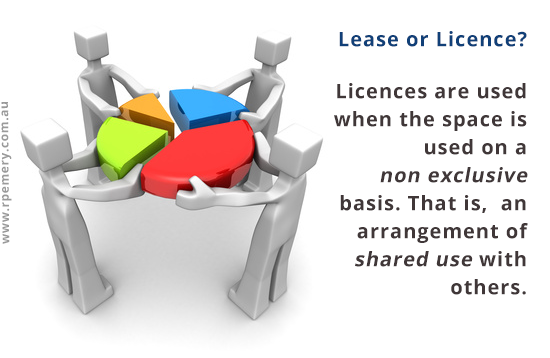 The state based legislation contains extensive definitions on what transactions are considered to be retail and residential leases. It also sets out certain practices and procedures that must be complied with for these types of Lease transactions.

The exact definition and types of leases which fall under a retail shop lease will differ slightly from state to state.  Generally, retail leases are leases of premises which are intended to be used wholly or predominantly for the retail sale of goods or services to the public.  Click for more information on retail leases..

Residential leases are leases of premises to be used or intended to be used as a residence.

Another type of popular lease is a commercial lease.  Examples include leases of warehouses, factories, offices and industrial property.  Click here for more information on commercial leases.

A licence confers non-exclusive possession of the premises

There are certain factors to consider when determining whether a licence has been created.  The most important criterion to consider is whether the right to possession is exclusive or non-exclusive.

Additionally, a licence will not usually contain the language or provisions commonly found in leases, such as:-

In contrast, provisions that require the licensee not to impede the licensor’s right of possession and control of the premises point to a licence, since they indicate non-exclusive possession.

Generally, a lease is created whenever one person gives another:-

A licence is not as formal as a lease

A licence is generally not as formal as a lease.  A licensee does not enjoy many of the rights held by tenants under a lease.

A lease grants the tenant a leasehold interest in the land

A lease grants the tenant a leasehold interest in the land.  A licence gives the licensee a contractual right to access the land.

Following are some examples of where a licence may be appropriate:-

Tip: If the property will be shared with others, or others will be coming or going (non-exclusive possession), than you will most likely need a licence.

Following are some examples of Leases:-

You may be interested in reading about these related topics:-